If you don’t believe Al Sharpton is emerging as “the president” of black America, just look at who’s speaking Wednesday at his annual National Action Network conference: President Barack Obama.

Timing is important. The nation’s first black president has largely finessed the topic of race. But Obama is now facing growing criticism from some African-American leaders that he lacks a “black agenda.” 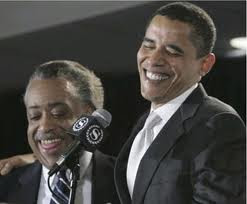 This criticism has been smoldering in some circles for more than a year. The problem for Obama is that it is coming from some of the nation’s most-quoted African-American leaders.

It’s a widening rift. One Obama cannot afford now. Going into what could be a tough re-election bid, the last thing Obama needs is voter dissatisfaction in part of his base.

The question is asked: Where can frustrated African-American voters go? True, they may be unlikely to turn to Republicans. But they could stay home on Election Day. And high black turnout helped Obama win the White House.

As a result, the relationship between the president and Sharpton seems to be growing closer. Sharpton has become a strong defender of the president. For example, he wrote in a recent New York Times op-ed article that Obama is not just the president for black America — but all America.

Sharpton’s event is Obama’s second opportunity within the last few days to speak before African-Americans in New York. Many in this group may remember the president’s attempts to push then-Gov. David Paterson out of the 2010 gubernatorial race, when he faced personal and political scandals. Obama also didn’t endear himself to some New York black voters when he suggested that Rep. Charles Rangel resign after being censured for ethics violations.

So this Sharpton link has proved helpful to the administration. First, Sharpton had Vice President Joe Biden speaking at his New York conference in 2009. Now, it’s the president himself. This is something of a coup for Sharpton, who has been a guest at the White House, most recently at a Super Bowl party.

Any African-American discontent with Obama was, until relatively recently, discussed in private. That is, until the PBS broadcaster Tavis Smiley brought it into public view.

Smiley hosted a Chicago conference in March, “We count! The Black Agenda is the American Agenda.” The title alone suggested trouble: A message that America is a melting pot — but the president’s economic initiatives are not filtering down to blacks.

Most at the event took turns attacking the president for abandoning black America. This can be dismissed as the reactions of a few peaople with their own agendas, but many were influential voices for African-American voters. Team Obama has reason to worry.

The president himself has tried to address this subject earlier. Four months before the Chicago conference, Obama did an interview with American Urban Radio Networks.

“The only thing I cannot do is, by law,” the president said, “I cannot pass laws that say ‘I’m just helping black folks.’ I’m the president of the entire United States.”

He cited his health care plan as an example of policies that “will be hugely important” for African-Americans. “What I can do is make sure that I am passing laws that help all people, particularly those who are most vulnerable and most in need. That, in turn, is going to help lift up the African-American community,” he said.

Obama noted that improving the state of blacks in America, “is going to take work. It was never going to be done just because we elected me.”

Contrast that to some of the shocking comments said about Obama at that March conference right in his old backyard at Chicago State University. Polarizing words were expected from Farrakhan, but his weren’t the only vitriolic remarks.

Dyson fired up the crowd. “Latinos asking him for something and they got something,” Dyson said, “Gays and lesbians said don’t ask don’t tell, changed it! Jewish brothers and sisters said deal with Israel, deal with it…Why is it, when it comes to black folks, all of a sudden we are persona non grata”

To be sure Obama isn’t the first person to face such unrealistic and unfair expectations to deliver quickly. But even among African-Americans, race has been a complicated issue for Obama. Remember the Time Magazine cover story, “Is Obama black enough?”

The last thing Obama needs now is a black problem.