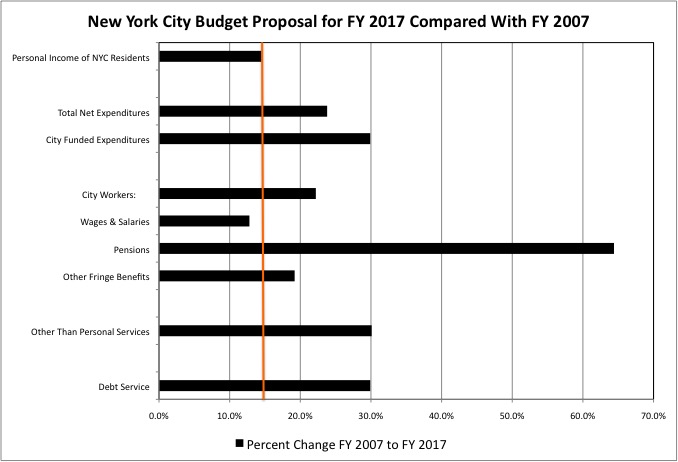 As noted in my prior post, the current New York City budget documents are being presented in a way...
Word broke last week that former NYC Mayor and $billionaire Mike Bloomberg is thinking of running for President as...

Mark this one done under the title: Rock’s Long Range Predictions. I predict that after he signs the term limit extension bill next week, Michael Bloomberg will find his approval ratings dropping like a heavy load. They will drop all the way to his political demise. Recently, his approval was in the high sixties percentile, having been as high as the seventies before that. By the end of next January, I predict that his approval ratings will come in be under fifty percent.

Furthermore, I expect that when the issues around the economic crisis sinks in, and when they begin to affect the city’s budget and attendant services in extreme ways; Bloomberg’s ratings will sink even lower. He will have little time to prevent the freefall, since the election is one year away. It is evident that the mayor will have to raise taxes and fees to increase revenue flow in the coming months; these won’t be popular measures. Like Senator John McCain in this presidential cycle, Mayor Michael Bloomberg will be negatively affected by the country’s current economic woes. They will both suffer similar election-fates.

It is a full year before civilians like myself should really be bothered about the 2008 Presidential election, and I’m already sick of it. I’m sick of Rudy, sick of Hilary, and in particular I’m sick of Mayor Bloomberg’s independent non-campaign. Now comes word from the Mayor’s “friends” that he plans to run, spending up to $1 billion, (gasp!), if he merely believes he can “influence the national debate.” Although this is way outside my area of expertise, with everyone writing about nothing else it seems, if I have to listen to it I might as well put my two cents in. If the Mayor wants to come up with a plan for a theoretical campaign he isn’t guilty of, I believe he shouldn’t run by himself in a reprise of the Perot, Nader and Golisano 15 minutes of fame. That would strike many as an ego trip. Instead he should recruit independent candidates for the House of Representatives throughout the country, who agree with his platform and agree to vote in a block for Speaker if they win, to run with him. Win enough seats to swing control of that body, and he’d really be in a position to “influence the national debate.”

Just before his re-election, Mayor Bloomberg and the Patrolmen's Benevolent Association reached a contract in arbitration that offset, in part, the soaring cost of police pensions by reducing the pay of new officers by 40%, to just $25,100. Similar contracts were reached with other unions, which then did not oppose the Mayor’s re-election. Those unaware of the history of such things might have assumed that the Mayor had imposed harsh terms. In fact, however, public employee unions always try to get better pensions, and to increase the pay of those about to retire upon which the pensions are based. And they always, time after time, eagerly agree to lower pay and benefits for future employees — the very employees the government will need to hire in the future to continue to provide services — so the new hires can be held hostage later. One might have thought that the 40% cut in starting pay for police and fire, and 15% cut in pay for most other titles, was a union proposal in exchange for higher benefits for those with seniority. But in fact it was the Mayor’s idea and the unions — “please don’t throw me in that briar patch” — gladly accepted.