In the tabloids, I watch with interest the articles we as a society show the most interest in, the ones that are most emailed from one friend to another. Those articles are often the ones about total nonsense.

Articles that are not going to put food on the table, help lower the high unemployment rate, pay the rent, or enlighten us in any serious way. I wonder why we don’t show the same interest when it comes to giving back to the community. 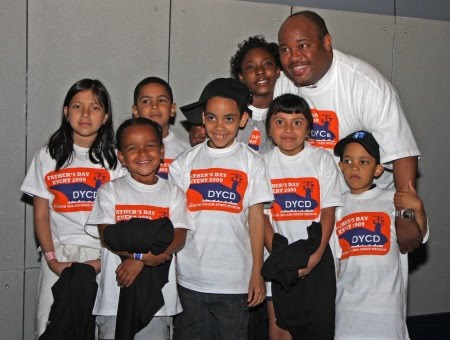 It breaks my heart on a personal level that in NYC—and in cities across America—40 percent of children do not graduate from high school, and that figure is much higher in some states. Yes there are inequities in life all around us. But when we are done with the long line of pointing the finger at someone else….what are we doing about the problem? “We” in this case is defined as you and I. What are we doing to better our communities. Where is our passion for what really counts.

The same interest you have in “clicking,” on Internet gossip, or “hating on someone else,” why not have that same interest in your own local community?

-Why not volunteer some time at a local PAL center or community center to benefit our children, help out at a senior citizen for two hours a week?

-Why not start a Boy Scout or Girl Scout troop. Or conveniently is that just something for someone else to do?

In the photo above is how I often spend my spare time. Yes everyone has their career, but folks it’s also about “each one-teach one. “ The photo is how I celebrated father’s day last year. Saturday morning at 10:00 AM on the Intrepid Ship Museum—with the Human Resources Administration and the city division for youth with young people. I believe if we want to begin to tackle some of the problems we face—which some say are insurmountable, it starts with “each one teach one.” Every year I bring about 10 new young people up to my home from the housing projects where I lived growing up. The Patterson Housing Project, and the Throgg Neck Houses.

Each adult should select a child to try and mentor them. Don’t just complain—any fool can just sit around and complain —but do something about it. Why not pick up 5 voter registration cards—go buy a book of stamps and personally register 5 people to vote—mailing off the forms yourself.

Look at for example what Brooklyn Senator Eric Adams did recently. Declaring he’s had enough with young men wearing their pants low enough to display their underwear—Adams used campaign dollars to fund his own re-election—so Brooklyn residents could see the sight of two "Stop the Sag" billboards, and really think about the issue. About us disrespecting ourselves. You may not approve of Adams, or of what he's doing, but the man is DOING SOMETHING.

And I was also very proud of the 2,000 young people this week that protested….the loss of funding for summer jobs. That’s constructive. That brings about results.

I have learned with my own life of overcoming tremendous obstacles and with other people lives….If you can see success, you can get there. But it all starts with education. We must do a better job of reinforcing education with our young people. Stand up. Where is the passion to do good things!

Every year I’m exhausted in the month of June from giving about 40 graduation speeches—but being tired was a small price to pay to see the joy on the faces of young people. For them to know that parents, and educators truly cared about them. I often met parents that were doing impossible things to support their kids. Each speech was worth it for me. To see the pride on a parents face is something that stays with you forever. To also see a young person know they have achieved something monumental in their life.

What are we all doing collectively and individually to improve our community. It sounds corny, or like some campaign speech but I have watched, one determined person can change the world.

One Person can change the world.

Growing up in the Bronx—it was my football coach that saved hundreds of lives. He was a one man example of how to improve police community relations. A white officer by the name of Bill—who would do his shift and then donate his time for years to helping underprivileged kids like myself who had no father figure. I always share with young people that my father never signed my birth certificate. It is blank in the father’s section of my birth certificate.

After decades I finally caught up with Bill and asked him—why did he do it? Why did he help so many young people. His response, "somebody had to step up." Well that man is an Angel in my eyes. His actions taught me all of us have a responsibility to give back. Another way I would do it was bringing young people from all around the city down to the TV station. They would come by the classload. I would stay with them for about three hours trying to show them how corporate america works….and more importantly….all the jobs that exist in TV News.

In my opinion, why not tell a police officer thank you tomorrow for all they do to protect this city. Putting their life on the line each & every day. A firefighter, EMS. Why not raise money for the local PTA to help the schools in your community. To buy football equipment, musical instruments and cheerleader outfits. I say it’s time for all of us to show some passion for what counts. Other schools have these things, why can't our children in NYC.

As a matter of fact, many schools in the tri-state area now have a graduation requirement that students do community service. That is an excellent idea. It teaches all about giving back.

Why not for example, that young child that walks past you every day, some of them may look threatening, but do you ever talk to them for a minute and ask how school is going? Explain to them why it’s important to get their education while everyday—- our pop culture teaches them that school is not cool.

If you don’t think you can make a difference in your local community—I suggest you go meet two women you have probably never heard of. Jean Corbett-Parker, and Jackie Rowe-Adams. Both lost sons to gun violence. These two Harlem women came together in 2006 to form Harlem Mothers S.A.V.E. Here’s what’s said on their website. (http://www.harlemmotherssave.com/)

“We need to put faces on the victims of gun violence,” said Ms. Corbett-Parker. “The community needs to know, up close and personal, how the senseless murder of one child impacts not only the immediate family, but all of Harlem. Too often, it is the best and brightest who are being taken away from us – and who will replace them?”

I suggest you look at the website to see the smiling faces of children. They are making a difference—and you can too.

When it comes to politics, do you even send an email—followed up with an actual letter when your local councilman/congressman does something you don’t like or you do approve of? Have you even taken the time to figure out who your local officials are?

I say don’t look at the TV and say Chris Matthews (On Hardball) what are you doing to make “everything” better. Rev. Al Sharpton what are you doing? Mayor Bloomberg, President Obama, Congressman Jose Serraro, and on and on. Yes all those folks have a responsibility—but we do too.

Each one, Teach one!