The race for governor is starting to heat up—but not necessarily between the candidates.

Instead it’s the top democrats. 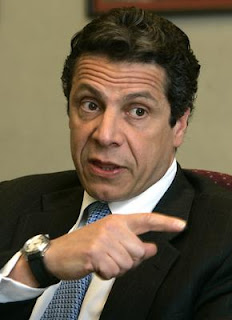 Soon to be Democratic nominee for Governor Andrew Cuomo and the powerful speaker of the Assembly Sheldon Silver.

Of course both men are downplaying a disagreement.

Cuomo has started doing media interviews and Monday told Fred Dicker, the state editor of the NY Post ( on Talk Radio 1300 AM in Albany) he did not see Assembly speaker Sheldon Silver as an "obstacle" to his agenda.

Silver responded he can work with Cuomo, but isn’t planning to sign the gubernatorial candidate’s pledge to clean up Albany.

Read between the lines.

They may be from the same party, but Albany is not big enough for both of them.

Either Silver as speaker has to go, or Cuomo with his aggressive agenda will be forced to back up. Sound familiar? Can you say Elliot Spitzer?

Cuomo, who announced his candidacy for governor on Saturday has been making all the right moves one would expect from the frontrunner in the race. He’s showing he’s ready for prime time, and he’s put Albany on notice.

Cuomo plans to travel the state asking citizens and candidates from all parties to sign a pledge backing his reform agenda, which includes several items that puts him at odds with Silver.

One that stands out: Cuomo's call for lawmakers to fully disclose their outside incomes. Something Silver as a lawyer has refused to do for years.

Here’s why trouble is ahead. Silver is used to dealing with tough rhetoric from new governors and he’s still standing. Every four years there is the promise of dramatic change to come to Albany, (even from incumbents) and yet the more things changes the more they stay the same.

Longevity advantage goes to Silver, but Cuomo is not the average politician.

Bet on it, Cuomo has learned from the mistakes of Spitzer. From day one it was very clear that either Spitzer or Senate Majority Leader Joe Bruno had to go. Ironically both did.

This will be interesting.

Andrew Cuomo has learned to “tone it down” when it comes to his public persona. He will come into office speaking softly and carrying a big stick. He also benefits from learning from the mistakes of his father, former Governor Mario Cuomo.

Silver is not known to back down from going to war with a powerful interest. Just ask former governor George Pataki. Or Mayor Bloomberg if the NY Jets have a stadium on Manhattan’s West Side. Then ask Bloomberg what happened to his plan to deal with traffic, congestion pricing. (even with the carrot of federal money to entice the city to do congestion pricing)

Cuomo and Silver will say all the right things in public, however no matter how good Cuomo’s reforms are, eventually Cuomo has to go to the legislature and Silver knows that.

Lawmakers quickly tagged Spitzer as someone who “doesn’t play well with others,” but Cuomo will have something up his sleeve to make sure he doesn’t run into the same roadblock.