You have to give it to Andrew Cuomo. The guy is disciplined and not taking the smear bait of Carl Paladino. 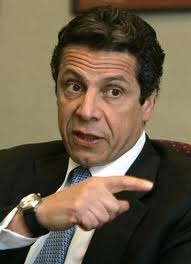 Paladino is throwing everything he can at Cuomo, but Cuomo is turning the other cheek. He’s not going down in the mud with Paladino. (At least not as of yet, and signs are Cuomo is not going to do it.)

Cuomo appeared on the radio show Tuesday of my colleague Fred Dicker of the NY Post, and even Cuomo himself moved away from the actions of the Democratic Chairman and said the party's picture of Carl Paldino where Paladino face is on the body of a pig was not "constructive." (A pig eating through state tax breaks and government. Paladino is a Buffalo real estate mogul)

"I don't think that's a dialogue that we need to engage in. I want to uplift I don't want to be part of a discussion that degrades. I don't think we need to go there, the collective we."

Folks you can love him or hate him. Andrew Cuomo is proving each day that he’s an improved candidate from his own past.

Bombs away. In the last few days Paladino has continued his line of personal taunts, questioning whether the attorney general had the "cajones" for a one on one debate.

But as of now, the strategy is back-firing.

Paladino is coming off as completely “out of his mind,” making it easy for Cuomo to say no to a debate, AND more importantly Cuomo's rejection will appear justified to the electorate. Cuomo could easily argue, how can I sit down and debate this man, look at the things he saying.

In the meantime Carl, remember the clock is going tick tock, and it’s not on your side.

Cuomo on Dicker’s radio show said he wanted to stay above a the nasty back and forth that has ensured between Democrats and Paladino.

Sure you let the surrogates do the dirty work, but Cuomo is saying all the right things.

"In terms of getting involved in a name-calling situation, I'm not going to do that," Cuomo said.

Cuomo will continue to say he wants to debate if all the campaigns can "agree on the details." In other words, include all the different candidates and run out the clock during an hour only debate- not a minute more. That strategy is as old as modern day politics. That’s what Hillary Clinton folks did at the debate I moderated with her and Republican candidate John Spencer. (The former Mayor of Yonkers) An hour, not an hour and a half, way upstate in Rochester *and* on a Friday night. There are many, many ways an incumbent can limit coverage of a debate. If they debate at all.

As of now, it appears the hand-writing is on the wall.

The younger Cuomo will borrow a page from his dad. Mario Cuomo did not debate George Pataki. They couldn’t “agree” to terms.

Carl, your making Andrew Cuomo’s job easy. Easy to say no to a debate, and easy to say look this man is completely unreasonable and wants to divide our state.

The test for Cuomo will come as the race continues to take a nasty tone. What will Cuomo do when Paladino throws serious mud. Believe it. It’s coming from both sides.