x
President Obama finds himself between a “rock and a hard place.” A major dilemma with the situation offering at least two possibilities, none of which may be politically acceptable.

In a radio address broadcast Saturday, Obama called for a bipartisan deal to increase the $14.3 trillion debt ceiling, while cutting federal spending in the years ahead.

The alternative: The possibility of a government default after Tuesday. 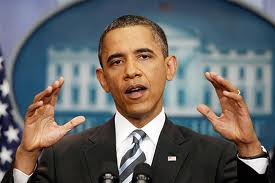 "Congress must find common ground on a plan that can get support from both parties in the House," Obama said. "And it's got to be a plan that I can sign by Tuesday."

But Politics is all about the art of the compromise, and how does one do that even if your the most powerful man in the world, and your up against a large group of republicans in congress that refuse to negotiate. Thus American Politics may have changed forever with the Tea Party having more influence than even they could have predicted. The power of simply saying NO!

What does Obama do?

If the House and Senate fail to agree on a plan to raise the nation's $14.3 trillion debt limit, this political third rail lands squarely in his lap, and his presidency could all but be decided Tuesday. The federal government would be barred from additional borrowing – and could quickly run out of money to cover its bills.

It would mark the first time in the nation's 225-year history that the government defaulted on its financial obligations.

If the President gives in, it may look like to American Voters that he caved in, and if he agrees to anything with only a temporary increase, that will only produce a rerun of this stand-off in six months. The White House has said a temporary solution is out of the question, but the clock is ticking.

Administration officials say a failure to raise the ceiling would also inflict additional damage on the already suffering economy.

U.S. stocks had their worst week in a year as the debt debate raged and political gridlock ruled.

The battle was largely defined by partisan politics over the past week, with Democrats and Republicans toeing their party's lines.

But the person with the largest political stock on the line is President Obama.