x
MOST OF US HAVE HEARD THAT THE REPUBLICAN contest for President consists of a lackluster field of good-but-unelectable candidates.

The top tier Republican candidates are Texas Governor Rick Perry, Mitt Romney, and Michele Backman. Well Perry, for all of his early gaffes is showing he must be taken seriously. 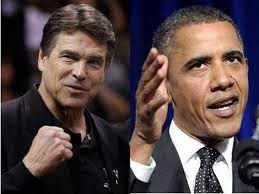 Just days after launching his campaign, Perry has surged into the lead of the race for the Republican nomination, according to a Gallup poll released Wednesday.

Rep. Ron Paul of Texas placed third with 13% support from those surveyed, followed by Rep. Michele Bachmann of Minnesota, with 10%.

Romney had maintained a lead in nationwide polling for months. Perry's ability to surpass him after only one full week of campaigning, at the time the poll was taken, shows how vulnerable Romney's lead was. Perry's entrance into the race also has slowed Bachmann's steady rise in the polls despite her win in the Iowa straw poll.

Certainly, Perry’s debut has not been flawless. Remember, he said Fed Chairman Ben Bernanke would be committing treason if he printed money prior to the next election and would be treated “ugly” if he then went to Texas – a harsh assertion that brought GOP wrath upon Perry’s head. He declined to affirm that President Obama loves America. He questioned climate science and evolution.

All eyes will be on Perry during a September 7th debate.

Good News for Republicans, they have a shot, but the bad news is it's almost impossible to defeat a sitting President, and two, they are looking at a possible long primary season if it goes down like this with the battle for social conservatives. Bachman wins Iowa. Romney captures neighboring state New Hampshire, and Perry wins South Carolina.

Is there a magical Republican candidate out there? Well entering the race late, certainly Bill Clinton showed in 1992, late isn’t always a disadvantage.

Let’s look at a few of the names.

Former NY Governor George Pataki
Why would Pataki – a moderate Republican who favors gay and abortion rights, has been friendly to unions, and has relatively low national name recognition – decide to seek a nomination at this late stage? According to Pataki, he was disturbed by the lack of leadership on the debt crisis. Reality may be auditioning for a cabinet secretary post in a republican administration.

Rudy Giuliani
As a moderate, he could complicate life for Mr. Romney in the first primary, New Hampshire, but he also hasn’t shown serious signs of organizing. And remember the race he ran four years ago. Reality. Giuliani may be positioning himself for VP on a Perry ticket.

NJ Governor Chris Christie
Christie for all the hype, has good reasons to stay right where he is. He’s been in his job only 19 months and could build a stronger résumé for a run in 2016 or 2020, depending on who wins in 2012.

Sarah Palin
She’s never far away when cameras are around, but there’s been zero indication that Palin is organizing staff or potential donors behind the scenes for a run.