They could have been bitter rivals for the Democratic nomination for president… but here was the former president honoring Mario Cuomo at his funeral.

Bill and Hillary Clinton stopped to do an on-camera interview with me (you can see the interview here) and made their points about Cuomo’s legacy. The former president explained:

The important thing for me in particular with this debate that has been going on in our country for 30-something years is that (Mario) Cuomo’s life embodied his values of work, family, and faith, but he believed everybody deserved the same life chances that he had, and that meant we needed a strong community. So his whole view of being in public service and government was to make the community stronger so everybody would have the same chances that he did, and you got that in all of its wonder here.

The likely Democratic nominee for 2016, Hillary Clinton, stood at her husband’s side and also chimed in on how Mario Cuomo will be remembered.

Well it was a legacy of service that was enviewed with faith and a sense that those that of us who are blessed, have to give back. He never forgot he (Cuomo) was put on this earth for a purpose larger than his own life. And that came across so beautifully in the mass today and Gov. Cuomo’s, Andrew’s remarks just embodied the extraordinary life that Mario Cuomo lived, and it’s an example for everyone.

Yes, of course Mario Cuomo was a politician, but Mrs. Clinton was accurate with her: “to whom much is given, much will be required,” (Luke 12:48) assessment of Cuomo. He was the voice for liberals and progressives at a time when there were few. We have to remember the time. The mid to late 1980s, it was so unpopular to be tagged a liberal. In many corners of the country, “liberal” was becoming a third rail of politics, and remains so in the year 2015.

But Cuomo also brought strong passion with his beliefs. I was just cutting my teeth as a radio journalist out of grad school when I was assigned to Cuomo from time to time. He was already a Democratic giant, well on his way to becoming a Democratic icon.

It was a trial by fire. The governor was legendary for his media critiques. Mario Cuomo had appointed the first African American and Latino to the New York Court of Appeals, and so I could just tell that from time to time, he was pleased to see me as an African American Journalist covering him. He never said it, but I could just tell and yet, in true Cuomo form, in my private encounters with him, he never yelled or screamed at me. It was almost like a debate, but a one-sided one that the journalist could not win. One that I certainly was never going to win.

One such session was following a New York public affairs show titled Like It Is with journalist Gil Noble. It was the governor, Gil and me on-air, and I had the audacity to give Governor Cuomo a “C” grade right in front of his face. New York was facing tough fiscal times, with tough decisions to be made.

Well, Mother Nature called afterwards, and I’m standing there at the urinal, and after a state police officer made sure no one else was in the restroom, guess who walked in and stood at the urinal next to me, telling me how wrong I was with my on-air assessment. But Governor Cuomo did it in such a way where he did not try to destroy my self-esteem, and here it is almost 25 years later, and I still remember that encounter. When I moved on to TV, there would be more, especially as I was one of the journalists front and center in 1994 when Mr. Cuomo lost to a relative unknown at the time, George Pataki.

Let me be clear, I for one will greatly miss Mario Cuomo.

Outside the funeral, I was talking to broadcaster Charlie Rose, (you can see the interview here) and Rose summed up Cuomo this way.

Then there was a more direct assessment from Charlie Rose.

The truth is, as the first one in my family to go to college, coming out of the housing projects in the Bronx with no father, Cuomo championed people like me and gave us hope, when there was often, nothing to be optimistic about. I never told him this. Maybe I should have.

He was amazing. There would be two sides. They would seem intractable. He would bring them in a room. He wouldn’t flatter them. He would ask them pointed questions, and somehow he would break them down and make a peace and then everyone was happy.

“At a time when people didn’t have hope, in New York, and in the country in a lot of ways, he provided it.”

On his way out, legendary entertainer Billy Joel stopped to talk to me.

Mario Cuomo was a great governor of New York. His legacy… New York was a better state than before he was governor.

We will miss you Governor Cuomo. It was an honor as a journalist to cover you.
Meanwhile Sunday Dominic Carter appeared on Al Jazeera America with host Morgan Radford, and Political Consultant O’Brien Murray discussing President Obama, and the week in Politics. 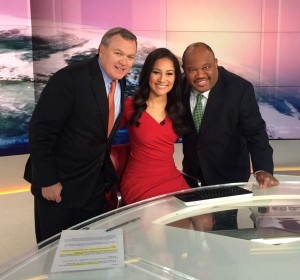