I haven’t done this since 2009, so lets take a look and see how federal, state and local government tax collectors would treat two prototypical fictional New York City couples, the Senior Voters, and the Young Hopefuls, today. In the past I showed that the Young Hopefuls would pay vastly higher taxes in New York on incomes identical to the Senior Voters, despite being much poorer in wealth, and in employer-provided and public benefits, as well. In this example I make the Senior Voters two former NYC school teachers who retired at age 55 in 2008 after the Bloomberg/Spitzer/UFT pension deal that year.

Currently age 61, they own a house in Windsor Terrace and have a pension and investment income of $132,500, plus retiree health insurance. Social Security and Medicare will also be received starting at age 65.   The Young Hopefuls, meanwhile, have an income of $80,000 per year. They are now age 35, and Baby Hopeful is now age 9. The live in a one-bedroom apartment in an old tenement building on busy 4th Avenue (at 14th Street) in Gowanus, have no retirement plan other than (perhaps) Social Security at age 67 or (more likely) medical marijuana followed by legal assisted suicide. But they do have health insurance today, with some public assistance, thanks to Obamacare. That is a big change from my past analyses, and one way that public benefits and burdens have shifted slightly to less well off younger generations since I last did this analysis. So how much would these two fictional couples pay in taxes? And how much would be left for other things? Let’s fire up the TurboTax and find out.

First, let’s go over the assumptions.  An excel table showing the analysis can be downloaded here.

The value of the Senior Voters’ home is based on recent sales of one-family rowhouses in Windsor Terrace Brooklyn, at about $1.3 million, and the property tax level is based on what the city currently charges there. As for the state’s property tax break program, in this example the Senior Voters do not qualify for “Enhanced STAR” or the city’s senior citizen tax abatement, because their income is too high. They do qualify for “Middle Class STAR” under current income guidelines. When last I did this analysis the New York City and State were also sending additional STAR checks to homeowners. That is no longer the case, for now.

In addition to property taxes, based on the information available to me they would also pay $4,223 per year in housing costs for items such as insurance, water and sewer, and heat and hot water. At the Young Hopefuls’ apartment, these costs, and the property tax bill, are covered by the landlord and included in their rent.

The rent for the Young Hopeful’s apartment is based on an apartment advertised on Trulia.com for 524 4th Avenue, Brooklyn, with six apartments and two storefronts. Per the NYC Department of Finance, the Class 2 property’s assessed value in 2014 was $131,457. The tax rate was 13.145%, with the tax split eight ways among the eight units.

In the past I’ve made at least one of the Young Hopefuls self-employed, and thus required to pay both halves of the payroll tax (Social Security and Medicare). But TurboTax now charges more for tax packages with self-employment income, so in the base analysis I made the Hopefuls employees. The entity that a tax is assessed on, however, is not always the entity that pays it. My view is that over the past 35 years in the U.S. the “employer” half of the payroll tax has actually been passed on to the employees in lower wages. After all, wage increases have been much greater for those over the FICA limit, which costs the employer nothing more in tax for higher pay, than for those under that limit. In any event if the Young Hopefuls had, like more and more workers, been forced to work as “freelancers” or “contract workers” they would have directly paid another $6,000 in payroll taxes.            I’ll discuss that situation in a separate post on federal taxes specifically.

In the past I made the Hopefuls uninsured with regard to health insurance. Obamacare has changed that. It would provide them with $106 per month in subsidies for the cheapest “Bronze” health insurance plan that would cost $330 per month, according to the NY State website. Their net cost is $2,962 per year,but they are now insured. As before, the Senior Voters get all their health insurance paid for — by New York City and then by Medicare in a few years. No wonder seniors and the public employee unions objected to Obamacare. “I’ve got mine jack, and you have to pay for it.”

Both couples would take the standard deduction, as itemization is not worth it.   The Hopefuls were hit with a much higher tax bill, as a percent of their income, when they were childless, but now get the Child Tax Credit and a Child Care Tax Credit on their $3,000 in child care expenses, two factors that greatly reduce their tax burden. In general, however, deductions (as opposed to credits and exclusions from income altogether) only help the shrinking number of upper middle class people who earn enough that their deductions are more than the standard deduction, but not so much that they are covered by the Alternative Minimum Tax.

Perhaps the biggest exclusion from taxable income is for employer-funded health insurance. This huge subsidy is greater the richer the beneficiary is (because their marginal tax rate is larger) and the higher the employer health insurance spending is. Those who designed Obamacare sought to put a cap on this subsidy, but after opposition by public employee unions the penalty for hugely expensive employer funded health insurance was shifted to the employer (or in the case of public employment, state and local taxpayers). That is the hidden issue in New York City and New York State contract talks.

This is analysis excludes sales and use taxes, which are in addition to the taxes discussed here and also contribute to New York’s nation-leading tax burden. Corporations the Senior Voters have invested in (through their city mutual funds) also pay corporate income taxes, in theory reducing their return. But the Senior Voters have a retirement plan for which the City of New York guarantees a minimum return that is far higher than most people have actually gotten since the (first) stock market bubble burst in 2000, and forces taxpayers to pay more or bear service cuts to make up the difference.

Even using the lower figure, with the Young Hopefuls as employees, they would be struggling. After taxes and the cost of their housing, child care, and health care they would have just $27,700 to spend on everything else for the year – food, clothing, Metrocards, everything. No wonder young workers can’t afford cars, particularly at Brooklyn auto insurance rates. 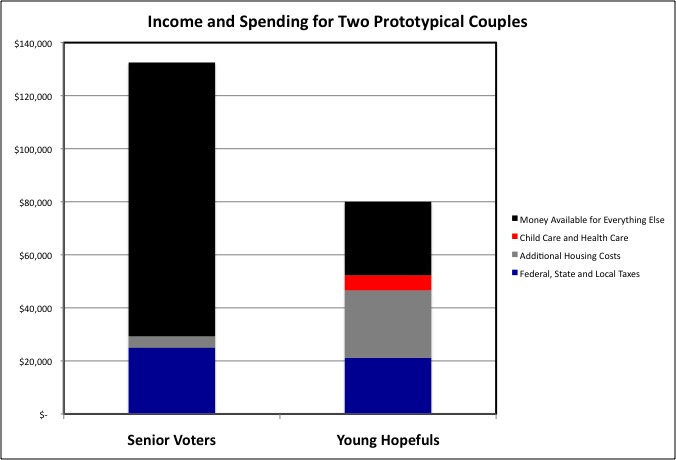 And in this example the Young Hopefuls are far from poor. As I noted in this post…

Moreover, because older generations have promised themselves more in old age benefits than they were willing to pay for, Social Security and Medicare (and Medicaid for seniors) are heading for a crisis. Federal politicians either propose keeping or enriching federal retirement benefits for those born before 1957 while slashing them for those born later, because they have “time to adjust” (the Republican solution). Or pretending there is no problem until the entire 1960s generation is receiving Social Security and Medicare, then “keeping our promises” while slashing benefits for those coming after due to “circumstances beyond our control” (the Democratic non-decision).

So the Young Hopefuls, if they really knew their future, would not expect to get much in the way of taxpayer funded old age benefits, and ought to be “adjusting” by saving perhaps 25.0% of their gross income, or $20,000 per year. That would leave very little for them to live on, so very few Young Hopefuls are doing this. And there would be a national economic crisis if they did save as much as they should. Because in addition to admonishing them to save, older generations require them to spend more to keep the consumption-based economy going – more even than they have, funded by debt, as I noted here.

Most policies that favor seniors were put in place decades ago when Americans were becoming richer generation-by-generation, with young workers often better off early in their careers than their parents who had worked and sacrificed all their lives. But they have remained in place even as younger generations have been left much poorer. And, given the cost of everything that Generation Greed has promised itself but was unwilling to pay for when working, there is now way younger generations will receive the same benefits when they are older themselves.  I wouldn’t invest in the cruise ship industry for the long term.

Indeed, whereas the Senior Hopefuls were promised retirement at age 62 after 30 years of work but actually received retirement at age 55 after 25 years of work, future teachers are being required to work 30 years into age 63 while paying more into the pension fund. Even as Baby Hopeful has experienced classroom cuts to pay for the soaring costs of that 2008 pension increase that allowed the Senior Voters to cash in and eventually move out.

As I’ve noted, public policies that favor the old at the expense of the young do not necessarily mean there is generational inequity, because the young have other advantages. As long as those policies are sustainable. As long as those now old were willing to make similar sacrifices when they were young, and those now old can reasonably expect similar benefits when old without impoverishing their own children. That, however, is not the case. Those now old succeeded in getting taxes cut to a lower level than they are today during the 1980 to 2009 period, ran up a bunch of debts and unfunded senior benefit promises, and yet now expect to collect. Thus far federal, state and local taxes have been increased to pay for this, even as public services for and future promises to younger generations have been cut. And it is only going to get worse, because of Generation Greed’s collective unwillingness to admit this.

Intergenerational inequity, however, can also be found in today’s code. We’ll go over those senior deals in more detail in the next two posts, one on federal taxes, one on state and local taxes.