In the United States, more government workers are employed in elementary and secondary education than any in other local government function, and indeed any government function period. At the state level, however, more government workers are employed in colleges and universities than in any other function. In March 2014, according to data from the Governments Division of the U.S. Census Bureau, the states employed 547 full time equivalent workers in state colleges and universities per 100,000 people, up from 523 back in March 2002. This figure did not include most community colleges, which are generally assigned to local government, but did include the four year colleges of the City University of New York, now tabulated as state government despite its historic association with the City of New York.

The fact that state higher education employment actually increased relative to population over 12 years is surprising, given press coverage of reductions in services and courses available to students over those years. One reason may be that the large “Baby Boom Echo” generation was passing through the college years during this time, and may have been more likely to linger in graduate school given the job market in the aftermath of the great recession. The college age population has started to fall more recently and with it, college enrollment, according to press reports. This data, however, still raises a fundamental question. Given that the purpose of higher education purportedly is education, why were there more than twice as many full time equivalent state government higher education non-instructional workers in March 2014 than there were instructional workers?

This is the third of a series of posts based on Census Bureau public employment and payroll data for March 2014, as compared with March 2002. The first post in the series, which described how the data was tabulated, provided a brief overview, and linked to a spreadsheet with the tables, is here.

At the time I inquired if the number of instructional workers was kept down because adjunct faculty were not counted, while the number of non-instructional workers was inflated by student jobs. I was told the answer was no. The employment of each is supposed to be counted, and weighted into full time equivalent workers if they are less than part time. Of course it is always possible that all the forms are filled out incorrectly. 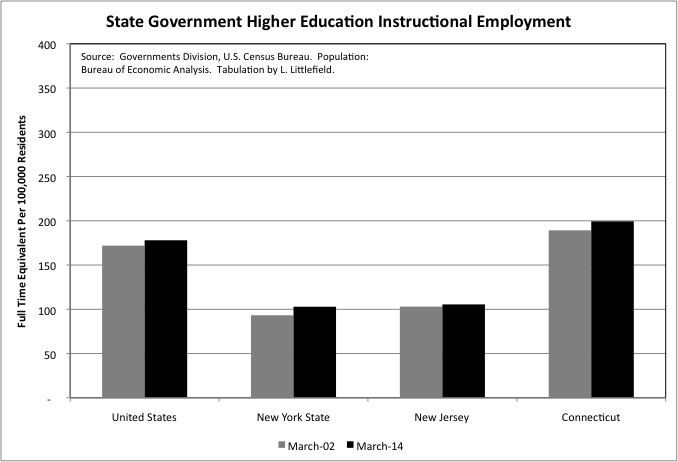 Compared with other parts of the country, a higher share of students in the Northeast attend private colleges and universities rather than state-run schools. As a result New York State had just 103 full time equivalent higher education instructional workers per 100,000 residents in March 2014, up from 93 in March 2002, and New Jersey had just 106, up from 103. The U.S. average was much higher at 178 in 2014, up from 172 in 2002. Connecticut, despite being the Northeast and being the home of Yale University and other prominent private colleges and universities, was above average in instructional higher education employment at 199 in March 2014, up from 189 in March 2002. 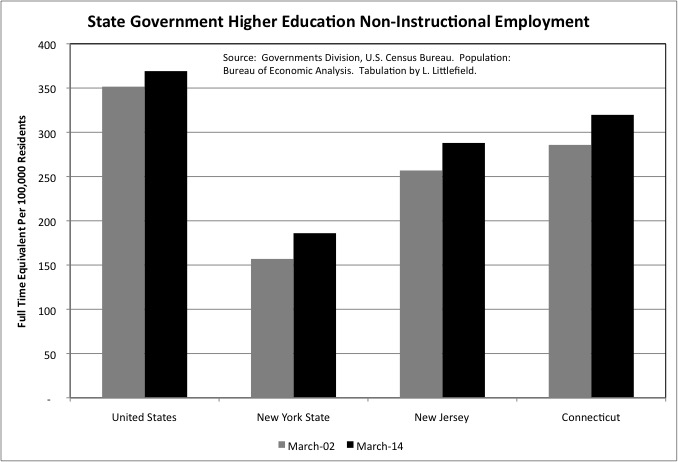 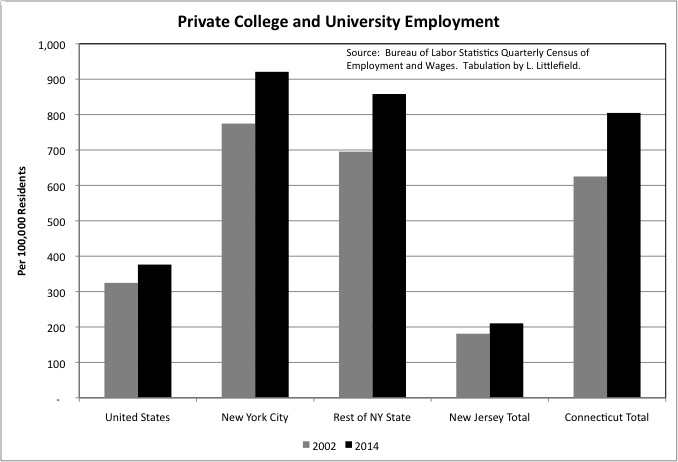 In Connecticut, private college employment increased from 625 per 100,000 residents in 2002 to 805 in 2014. Combined with that state’s relatively high state government higher education employment, it is clear that Connecticut’s colleges and universities, net, are attracting students from other states. One such state might be New Jersey, where both public and private higher education employment are relatively low per 100,000 state residents, albeit increasing.

One may well wonder how public and private colleges and universities were able to increase their employment per 100,000 Americans from 2002 to 2014 despite falling wages and labor force participation over those years, and increasing financial strains on many families. Part of the answer appears to be an explosion of student loan debt, which now exceeds debts from car loans or credit cards.

One strategy to avoid student loan debt is to live at home and attend a community college for two years before finishing at a four-year college. Community colleges also provide two-year degrees, and vocational training in non-academic fields. Community colleges are generally classified as local government entities by the U.S. Census Bureau. Though not in Connecticut, where the state government operates them.

Nationwide, the 41 local government higher education instructional employees per 100,000 people in the U.S. in March 2014 was less than one-quarter the level of state higher education instructional employment, and it was down from 47 in March 2002. There were also decreases in New York City, the Rest of New York State, and New Jersey. Perhaps because of local government fiscal crises. Perhaps because community colleges are something one pays for rather than borrows for, and fewer young adults had the jobs and thus income required to pay for classes. 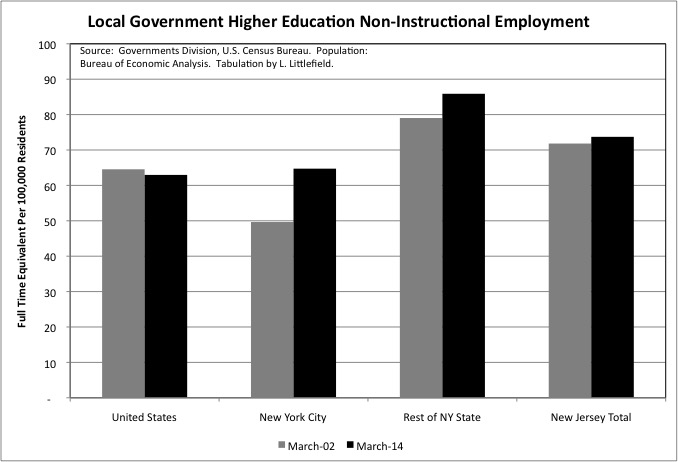 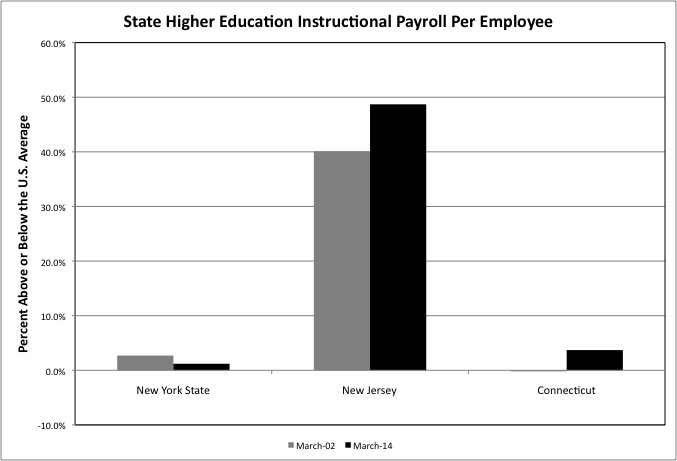 Note: I have discovered an error in the calculations in the chart above and below.  This is the corrected version.  Sorry about that, but I’m just one guy putting out a lot of stuff. 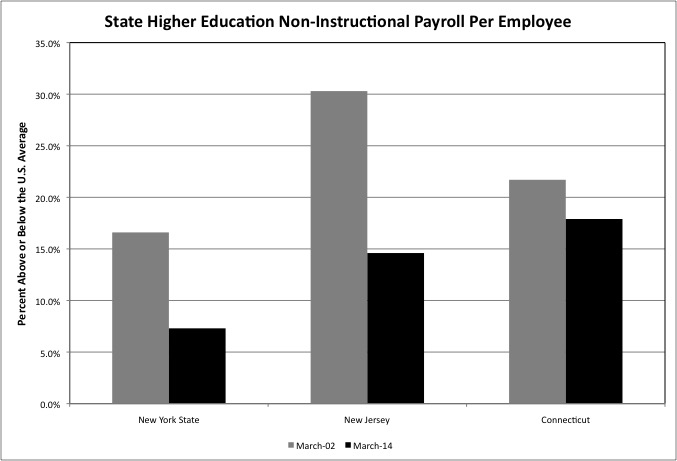 State non-instructional employees earn more, relative to the U.S. average, in New York State, New Jersey, and Connecticut, but that gap shrank from March 2002 to March 2014.

Anecdotally, it would seem that community colleges play a lesser role in the Northeast than in other parts of the U.S where vocational education, and non-professional vocations, are more respected.